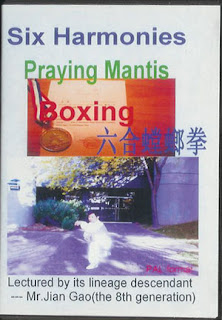 I have not included much on the Chinese martial arts (CMA) as of late because, well, not much is happening within the community that is worth reporting on in my opinion. But I thought I would share this DVD review I offered to my good friends at Plumpub.com a while back.

The demonstrator and producer of the DVD is my martial uncle Gao Jian from the land of Down Under. He was a student of the late Ma Han Qin with my teacher Hu Xi Lin.

I recently obtained a copy of Gao Jian’s first public DVD, “Six Harmonies Praying Mantis Boxing” from Plumpub.com, and decided to write this review of one of the first English language DVD’s produced on this rare system of Northern Praying Mantis. Ma Han Qin (1920-1997) (Gao Jian’s teacher) was one of the foremost experts of Northern Mantis in all of China during the 20th century, and he trained many students in Meihua Tanglang, (Plum Blossom Mantis), Liuhe Tanglang (Six Harmonies Mantis) as well as Taiji, and weapons. Gao Jian has a very nice montage in the beginning dedicating the DVD to his late teacher Ma Laoshi, under whom he was an 8th generation disciple.

Filmed and produced in Australia, where Gao Jian lives, this DVD is a cursory overview of the Liuhe Tanglang (LHTL) system offering Ji Ben Gong (basics) as well as Taolu (forms). The DVD itself is in PAL so you need to ensure that you have a DVD player that reads PAL, prior to purchasing the DVD. Otherwise you will need to pay extra to convert it to NTSC (which I had to do). Total running time is approximately 30 minutes.

The structure of the DVD begins with Gao Jian giving a basic overview of the characteristics of LHTL, as well as showing the basic stances, hooking methods, and a few conditioning drills. They are very easy to follow along with, though there are no close ups of the hand work. Gao does not spend much time explaining the technique, nor showing how it is applied. It seems as if he was essentially demonstrating the basics without any intent of making this part of the DVD instructional per se.

As soon as the basics are covered Gao Jian dives into demonstrating the seven forms found within LHTL, some are even shown twice though others are not, again a lack of congruency in the flow of the film. As with the basic’s section of the DVD, the forms are essentially being demonstrated without any instruction. There are two different spots they film in, one with a building in the background, the other in a park setting that is quite serene.

All seven forms of the LHTL system as taught by Ma Han Qin are represented:

Gao Jian does a very nice job demonstrating the fluidity and power of LHTL throughout all these forms. As stated above some of the forms are played twice while others are not. After the forms are complete the DVD ends.

Overall I think it is great that more information is slowly starting to creep out about LHTL, as it is truly one of the treasures of Chinese martial arts and has been scarce here in the western hemisphere, being more accessible in mainland China. This DVD is a rarity indeed simply because Gao Jian demonstrates all of the forms found in this system in their entirety. He is obviously very willing to share his art with the world.

My only criticisms of the DVD are the absence of applications (something sorely needed in Chinese martial art DVD’s), and the hodge-podge production quality. Gao Jian’s voice is often hard to hear because of the wind and poor sound quality, and while the video was clear and in color, using the building as a background shot was a poor choice. Other then that the DVD is fairly simple to navigate and access.

It is a bit pricey for a 30 minute DVD that is basically a quick demonstration of the forms, and a few basics (certainly not comprehensive of the LHTL basic training regime), but serves as a nice reference for those trained in LHTL. Do not buy this DVD for any instructional information, as it has none. I must say it is refreshing to finally see some media coming out involving Liuhe Tanglang. “Six Harmonies Praying Mantis Boxing” is a nice reference DVD for those who train the art, and a great general overview of the varied forms for those who have never seen this beautiful martial system.