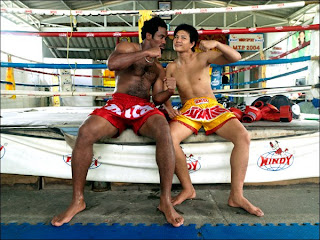 I am a huge fan of the Travel channel. A perpetual daydreamer, and chronic adventurer that loves travel many of the shows on the Travel channel are lots of fun and share destinations and venues that I could never afford to get to in real life!

One of the newest programs is “Dhani Tackles the Globe” where Dhani Jones, and ex-football player, travels the world learning about the native cultures via the sports they play. Last nights premier opened up with a full episode dedicated to Muay Thai kickboxing! So naturally I tuned in with excitement!

First of all let me voice my displeasure with other shows such as the “Human Weapon” and “Fight Quest” which have aired over the past year or two on rival channels, and have fallen quite short of what I was hoping for in terms of depth and exposure for the martial arts they featured.

So when I heard Dhani would be tackling many of the worlds indigenous martial arts such as Muay Thai, Glima, and Sambo I was stoked!

For the most part the episode was excellent. Dhani is already in amazing shape so they throw him right into hard training, which he took to pretty well and seemed to pick things up quickly. Realistic training clips were peppered with trips around Bangkok to visit different cultural habitat’s such as 14th Century Wats, street markets where Dhani chews on some bugs, and to visit Lumpinee stadium (the equivalent of visiting Wrigley field for baseball fans). A nice combo to keep the wife interested while we get our fix of ass whooping!

Dhani has a very outgoing personality and offers a great sense of humor (his comments waiting for a taxi are great!). Overall a very likable character who can go through the rigors of hard training in hopes of winning a fight that has been set up for the end of his visit.

And this is where I start pulling out what little hair I have!! As witnessed in shows such as “Fight Quest” and “Human Weapon” the “fights” that are arranged for our contestants are usually rather impotent and lame. I understand the producers of the shows do not want their hosts getting their ass handed to them, and on the other hand do not want to have the foreigner come in and dominate either. But overall these hosts had opponents basically fed to them with embarrassing results.

Dhani done did dropped the ball on this one. Now granted it is hard to find a Thai that weighs 200#’s+ to match up with Dhani’s 6’1″ 230# frame, but the butterball they find is embarrassingly overweight, and could not fight his way out of a wet paper bag! I believe he threw two solid punches and the rest of the time struggled to catch his breath.

Though this drove me nuts I must admit the rest of the show was interesting, entertaining, and overall will get me to tune back in next week for sure! I just hope this is not a harbinger of things to come in terms of “giving” Dhani victories in these different events. I suppose time shall tell.