I had the distinct pleasure to sit down and have coffee with Ellis Amdur a few months back where we discussed martial arts training, teaching, students, and practitioners over sips of of caffeine. I was thoroughly impressed by Ellis’ demeanor, attitude, and approach to the martial arts in general and the traditional Japanese martial arts in particular. He has a child like glow about training, yet commands your attention almost like a father figure would when speaking of his 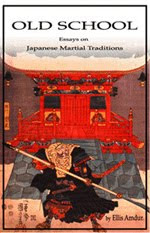 passion.
As we departed he offered me one of his books, “Old School – Essays on Japanese Martial Traditions.” I must admit I have only a cursory knowledge of the traditional Japanese arts mostly gleamed from Donn Draeger books I have read throughout my life. So much of this world is new to me, and I must admit I find it fascinating.

One of the main subjects Ellis and I discussed was the system of Araki Ryu Torite Kogusoku
which includes long range weapon combat, close quarter weapon combat, as well as empty hand techniques and psychological training, all which is built on a solid foundation of grappling! Naturally this piqued my interest.

“Old School” is one of only a few books that touches on any aspect of Araki Ryu, and Ellis is one of the only westerners qualified to teach and write about Araki Ryu. But Ellis has also attained teaching level in many other martial traditions and Araki ryu is a small portion of the content of “Old School.”

Addressing certain aspects of various schools of weapon based arts, “Old School” certainly reads like a series of essays using traditional koryu as it’s base all the while paying homage to various teachers and traditions. Here is the table of contents: 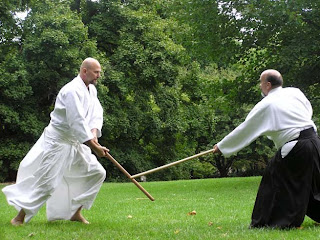 One of the things I like about Ellis is he truly is old school in that he is so giving and willing to share, yet is very particular as to whom he takes on as a student. The chapter on Blood Vows reveals much of this approach as Ellis takes the reader through what the Chinese traditions call “Wu De” kind of a martial etiquette if you will. Subtlety Ellis lets it known how he feels about keyboard type warriors, and those who like to show off. All the while Ellis has impeccable tact in conveying these ethos’s.

Ellis is student and a scholar of his traditions drawing no quarter when dissecting the truth in the movement and technique of these arts. He dispels many of the silly fantasy based creation stories that often become dogma in ancient martial realms. This is a lesson the Chinese Martial Arts community could really use! For instance Ellis writes about the sickle never being used as a “farming” implement like most of us are told when learning such a weapon. It’s design alone would not be conducive to 1,000’s of swings a day.

On the subject of the Naginata, Ellis also shares why many consider it a “women’s weapon” and writes on a weapon relatively unknown here in the west. He casts his critical eye towards all aspects of the weapon and its training.

I admire this approach by modern martial arts writers, and historians. The myth and fable based ideologies and theories become less and less attractive as one delves into the deeper aspects of the art they are studying. Ellis has become quite the inspiration for a young student such as myself and I encourage you to go out and get any of his writings as I am sure, regardless of your participation in the Japanese arts, you will become inspired as well! “Old School” is a pleasure to read and will rest on my bookshelf for years to come, as I will want to pick it up and re-read this book as I mature in the martial arts.

Getting to Know The Rules – Brazilian Jiu Jitsu & The IBJJF