Thanks to my friend Georgette who turned me onto the story of Oswaldo Fadda (1921-2005), a red belt (9th dan) in BJJ (the greatest level a non-Gracie ever achieved).  Oswaldo trained under Luis Franca, who in turn trained under the legendary Mitsuyo Maeda.

On the 27th of January 1950 Oswaldo was abble to finally open his very own academy fully dedicated to Jiu Jitsu, but he was always seen as an outcast by the Gracie’s who failed to see the potential of a BJJ team in the suburbs. In 1951 Fadda issued a challenge to the Gracie Academy. He issued the contest through the Media stating in the Globo journal: “We wish to challenge the Gracies, we respect them like the formidable adversaries they are but we do not fear them. We have 20 pupils ready for the dispute.” Helio gracie accepted to have his students face Fadda’s. The event took place in the Gracie Academy and Fadda’s team won, making better use of their footlock knowledge, something the Gracie’s lacked and frowned uppon ever since, calling it “suburban technique” (Tecnica de Suburbano). The highlight of the competition was when Fadda’s pupil “José Guimarães” choked Gracie’s “Leonidas” to sleep.
To read the entire entry on BJJ Heroes.com click here!

This got me thinking of how many different BJJ practitioners are out there under the influence of someone other then the Gracies!?  Maeda had a number of students, and to be able to go back a little in time and train with those who were fortunate enough to get their black belt under Maeda would be an invaluable experience.

To compare and contrast their approach to the art, where for instance Oswaldo obviously had an affinity to leg attacks, which in turn shaped things for the future as we see now days the IBJJF rules (formulated mostly by Gracie lineage holders) are quite anti-leg locks.

Coming from a traditional background I find the lineage aspect of the martial arts fascinating (I actually wrote my senior thesis in college on the discipleship ceremonies in the Chinese martial arts which ties in very closely with lineage.).  The father-teacher role is no less weaker in BJJ though you rarely here about “disciples” or any other lineage mention.  But think about it… the Gracie brand IS their lineage!

I will revisit this topic in the future, but in the meantime here is some interesting tidbits:

The best all around lineage chart with individual links and info; It is called BJJ Tree.com!

From the Jiu Jitsu Laboratory a very nicely laid out flow chart of the ever “evolving” lineage of Brasa / Alliance / Telles / Checkmat / Atos: 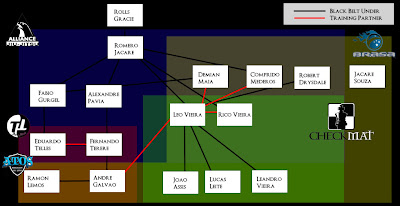 And here is one of lesser convuluted family tree’s for the Gracies I have seen: