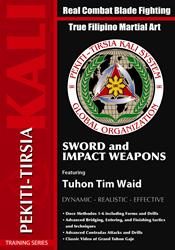 Hot on the coat tails of their first release, “Strategic Knife Defense” the Pekiti Tirsia Kali Global Production crew has released “Sword and Impact Weapons” with Tim Waid presenting the first DVD in a series on the authentic Pekiti Tirsia Kali system.  The goal of Tuhon Tim Waid and his teacher Leo Gaje Jr.  with releasing these DVDs is to present the authentic art of PTK as it was handed down within the Gaje family, and provide a clear training progression and curriculum to follow.

The foundation of PTK is found within the Doce Methodos, or Twelve Methods, and Waid presents the first 6 methods in some of the best instructional material I have ever seen representing the Filipino Martial Arts, not to mention Pekiti Tirsia Kali!  Contrary to what many may assume, it is not the bevy of techniques nor the complexity of flashy movement that makes this DVD stand out.  Rather it is the approach and method in which Tim Waid has organized and presented the 50 minutes of material.

Here is a great 5 minute preview of the DVD:

When I first started training the FMA it was the early 90’s with Prof. Remy Presas who was a pioneer in Arnis, as well as being one of the first to produce a series of instructional VHS tapes (“Google” it kids!). I mention this for a couple of reasons; one being how far the technology of recording equipment and organizing content has come in the past 20 years.  Tim Waid and the PTKGO has set a new precedence with these DVDs!

Content:
Tim starts off the DVD offering the definition and philosophy of Pekiti Tirsia Kali.  He does not delve too deeply into the origins and technical meaning of the literal translation Close Thirds, but stresses the foundation of PTK: life / success / good health, throughout the instructional.

Advanced Combat Methods:   Technically there is no instruction in this section, but Tim showcases free flow and technical sparring as well as live blade sparring.
Extras: 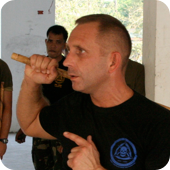 Arguably the gem of the DVD in regards to historical footage.  Here we have about 10-15 minutes of Abecedario instruction from Leo Gaje Jr. circa 1981!  Considering it is over 30 years old the footage is fantastic and the instruction is clear where Gaje demo’s the Abecedario target areas on a student and then has the student do a basic set of calisthenics.
Breakdown:  Filmed in an all white room with dark clothing on the participants makes movements and weapon arc’s very clear and easy to follow even with full speed sparring.  During the instructional segments Tim Waid is exceptionally clear and concise with his verbage, offering definitions where needed and not wasting time nor opportunity to regale the viewer with stories (which I am sure he has, but that is not the context of an instructional DVD.  A pitfall MANY teachers fall into when they find themselves on camera!). 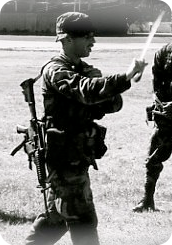 Tim’s approach to training and demonstrating is second to none from what I see (caveat; never personally met nor trained with Mr. Waid) on this DVD.  Tim is a man of slight nature but purposefully choose his biggest and strongest opponents to demonstrate on with this instructional.  Lets face it… this is not often the case, where instructors “show off” on a smaller / weaker / very willing partner.  Demonstrating that proper application of angles and execution of technique will trump strength and size every time!
Along the same line I liked how all instructionals and much of the free sparring is repeated in slow motion.  This is crucial when teaching ANY weapon, as the angle and application are often lost in the speed and suddenness of the attack.  And lets not overlook the fact that they are free sparring on this DVD!  A standard in Pekiti Tirsia Kali is unrehearsed levels of uncooperative drilling including full contact sparring.  Waid offers the basic foundation to safely and intelligently drill your techniques with partners.
2012 is looking very positive for practitioners of Pekiti, as well as all FMA fighters, as Leo Gaje and Tim Waid (PTKGO) are on tract to release some of the best instructional DVDs you will ever own.  Essential viewing by practitioners of Pekiti Tirsia worldwide, these instructionals (look for the solo knife DVD review in the future here on The Ground Never Misses) are a steal at $40 each and can be ordered here:PTKGO safe online store!

Martial Arts Sports Competitions and Online Betting for Them