The technical definition of “sandbagging” as defined by the Urban Dictionary:

According to Ehow the origin of the term came from the bullies and hooligans involved in street gangs around 1887,  though surely the “strategy” was used well before it was awarded nomenclature. 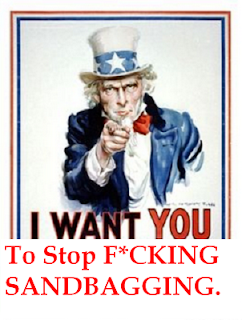 In the 21st century the term sandbagging is most commonly made in reference to an individual or team in a given sport.  In ANY given sport.  Unfortunately it also rears it’s ugly head in grappling and Brazilian Jiu Jitsu though organizations such as IBJJF, Grapplers Quest, and NAGA track their competitors and what levels they competed in at the previous tournament to ensure no one drops down a belt or level.  (*The Miyao brothers just found themselves slapped with a 4 month suspension from the IBJJF for being promoted to brown belt too quickly!  Though they were cleaning up at the purple belt division they were only a purple for around a year I think.)

Lets imagine for a moment I have grown up grappling, wrestled Greco Roman All American in 1997, 98, 99 placing 7th, 8th, and 8th respectively.  I go on to compete in the 2000 ADCC (yes, the Abu Dhabi Combat Club championships) placing 4th, losing only to Royler Gracie (no shame in that!)!   Right around that same time I get involved in MMA where I amass an 8-13 pro record beating the likes of Jeff Curran, Jeremy Bolt, and Tetsuo Katsuta in events such as Hook n Shoot, WEC, and IFC.

Now flash forward to July 2012, Bonney Lake, WA. Revolution Tournament (for those of you unaware… it is a local tournament of about 500 competitors).  Imagine now I enter the adult BLUE belt division for BJJ in my respective weight category.  Now perhaps I am not that learned in the art of BJJ and blue belt is an honest representation of my level in BJJ.  But don’t you think if I enter a local tournament fighting in BJJ, with 15+ years of wrestling experience which includes fighting at the most prestigious grappling competition, the ADCC, AND lets not forget I have fought professionally amassing an 8-13 record….. don’t you think for the fairness of my opponents, who most likely have on average 1-4 years of grappling experience at the blue belt level…. don’t you think that maybe… perhaps… I should compete at a level much higher and indicative of my overall understanding of grappling?

I end up wrestling a guy to the ground using a cross face and grapevines to make him miserable (these are classic wrestling techniques) and I eventually squeeze out a win.  Imagine what I must gain from the experience?  I go into a small, local tournament where I sign up in a division that is at most considered intermediate in the BJJ realm.  I utilize my wrestling skills and strengths to dominate my opponent who had considerably less experience not only grappling, but competing at the highest level as well.

I can honestly say I am not sure what I gain, but I do know what I offer the sport, the art, and my fellow competitors when I sandbag like this… I demoralize my opponent who most likely has no clue who he is fighting, nor my experience level.  When folks notice watching the tournament they wonder, why would an event allow someone to come in and compete with such a difference in experience level?  Fellow competitors do not get a true gauge of where they stand in their respective divisions and categories.  In the end sandbagging is purely a selfish stroke of the ego in my opinion.

Now I am not interested in starting a feud with any local cats so I will refrain from name dropping here, but me and my coach spotted this cat at the Revolution a few weeks ago.  He was in one of our blue belts divisions who did not have to fight him.  In the end this guy did not win anything and simply worked over his one opponent I saw him fight.  I walked up and consoled the fighter afterwards explaining who he just fought and that all things considered he held his own pretty well.

I guess we all deal with that demon the ego in different ways.  Who am I to judge?!  But ask yourself next time you consider sandbagging… will the spoils of victory taste sweeter with less challenge?  I have won and lost at both the biggest and the smallest of tournaments in my short career.  I can honestly say my most memorable moments have been when I have lost after stepping up to the situation!  I fought a brown belt in submission only with about 2 years max under my wing.  Got beat, but learned a ton and felt great afterwards because I challenged myself and did… ok.  Not super, but certainly not as bad as I could have considering the experience gap.

I wish you the best on your journey friend, I truly do.  I implore you to find another way of going about it if you could.  The truly sad thing is this guy is a coach to local fighters!!!  So not only has he decided to sully his reputation and honor, but he is now passing on the same BS attitude to another generation.  Sad.

Here is an interesting article on the very same subject!

Orthodox vs Southpaw in MMA