One of the greatest things in the martial arts is making new friends and meeting online ones face to face.  Such is the case of Scotty Nelson, On The Mat’s owner and master in command.  Scotty has been a supporter of The Ground Never Misses since the early days offering gi’s and apparel for review and always offering encouraging words and support through my tournament ups and downs.  So I was quite pleased to be able to meet the man face to face at the IBJJF Worlds over the weekend, and was as giddy as a kid when he invited me to OTM’s warehouse.

Scotty is old school BJJ… many don’t know, but he has been around since before the Gracie craze.  That is what is great about Scotty… his first and true passion is Brazilian Jiu Jitsu, and his passion is conveyed in his kimono’s and rash guards too (I snagged a new OTM rashie on the way out, check back for the review soon)!  So it should come as no surprise to anyone that Scotty has produced a limited run t-shirt that sends a message to modern day sport BJJ practitioners: 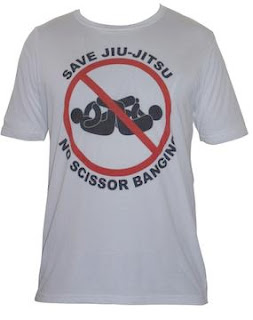 I will write a separate review of the worlds later, but I must say something here… to the officials at the IBJJF:
BRING BACK THE HEEL HOOK!!!   I am SO tired of seeing this bullshit 50/50 guard and I can only imagine Helio and Rolls are rolling in their respective graves!  This was NOT the vision Helio had for his blessed art.  Did we forget that BJJ was created as a MARTIAL art, a method of self protection and preservation?  Dropping down and playing footsie for 10 minutes and winning by an advantage is how you wish to win the Mundials??  Not Buchecha.  Not Rodolfo.  Not Braulio.  And certainly not the master class of yesterday where pressure, control, and dominant position led to wicked submissions. 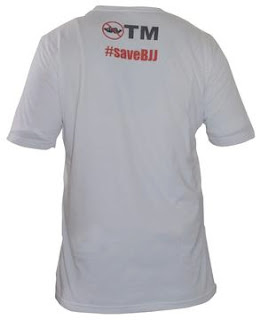 All of our 50-50 gripes and issues would be negated in one simple tournament simply by allowing heel hooks, at the brown and black belt level at the very least.  So bombard the IBJJF with messages and emails demanding the inclusion of the heel hook (who has been unfairly maligned and marginalized for no good reason!), and in the meantime hit up On The Mat to order your “No Scissor Banging” t-shirt today!

Super soft poly-cotton blend and a relaxed fit as with all OTM shirts, you will no longer have to explain BJJ competition to your friends who don’t roll!

Show some love to Scotty, OTM and BJJ!

Thanks again to the awesome crew at OTM and Scotty!
Jake

Training with the one of the Dirty Dozen of BJJ