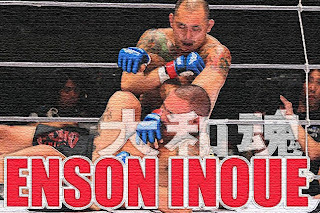 Over 16 years ago on May 30 1997, one of MMA’s most historical fights took place in Augusta, Georgia.  Enson Inoue (Shooto champ / one of the earliest black belts in BJJ in Japan / overall awesome cat!!) took to the UFC’s octagon and squared off against three time all american Iowa wrestling superstar Royce Alger!  Royce was considered by many to be the protege of Gable and even Enson offers mad props saying Alger is “…Gable’s toughest wrestler.”  This would go down as being one of the most important and future shaping bouts in MMA history.

You all know I am a wrestling fan, and most know that I have a man-crush on Inoue (one of the pioneer grapplers who transitioned smoothly to MMA), so this analysis may be a bit biased… but that makes it no less accurate.

Back in the early days of bare knuckle UFC one could almost always count on the wrestler shooting without much of a back up plan if it fails, and you can see Enson just about nails the crucifix before setting up the arm bar from closed guard.  He eats a few shots in the process but gains a W in the UFC with one of 9 career submissions in 12 victories.  In other words Enson is the shnizel!

Above and beyond the arm bar victory this was a historically pivotal fight as Enson got injured in the bout with Alger.  Back in 97 the UFC was still tournament style with each winner advancing throughout the same evening.  By the 13th installment of this style of fight, the UFC realized they need back up fighters in case of injuries.  As luck would have it a very young (the youngest to fight in the UFC at that time at 18 I believe) kid by the name of Tito Ortiz won the alternate bout and replaced Enson who was set to face Guy Mezger.  Though Tito would go on to lose via a guillotine, this scrap with Mezger would catapult Tito into stardom as he would quickly climb the cage of success and become one of the most dominant and controversial fighters in MMA history. 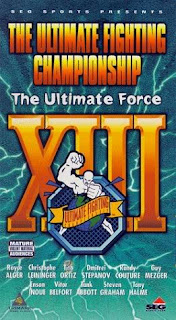 Who knows what would have come of Enson moving on to fight Guy Mezger.  It would be the first and last time we would see Enson grace the octagon, though he would go on to win the Shooto LHWT title, fight the likes of Randy Couture, also throw down in a few Pride FC events.

Now days you are more likely to find Enson at an arts fair where he sells his hand made Yamato Damashii (Samurai Spirit roughly) bracelets which the profits of go to those still in need after the devastating earthquakes and subsequent nuclear disaster in his native Japan. Here is a link to a write up I did a couple years ago on his bracelets! I still have yet to get one and do a review, but check out the great selection he has.  Plus it is hand made by the man himself!!!!