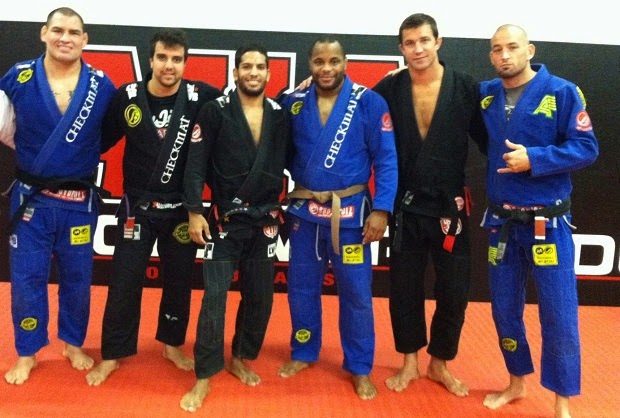 I have said it before and will say it again… mixed martial arts (MMA) has single-handily risen Brazilian Jiu Jitsu (BJJ) into the lime light of pop culture, and conversely MMA will also be the downfall of our beautiful art. It has become unnervingly common for MMA fighters to get fast tracked to the level of black belt in BJJ.  Now those with a discerning eye will notice that MMA is not in fact BJJ, nor vice versa.  Though techniques and movements are borrowed from BJJ for MMA, but the two are completely different at their core.  So for Throwback Thursday I say throw back the belt!

BJJEE shared a great article where Xande Ribiero apparently concurs with my opinion:

“I find this a little embarrassing. It’s a joke! You shouldn’t give a black belt just because the guy is tough. You have to respect the master and your companions. Many people get the black belt to open affiliates of an academy, and that is unacceptable. Another thing that makes me angry is seeing an MMA fighter getting a black belt. MMA is not Jiu-Jitsu. You have to know how to use the Gi, must have commitment to Jiu-Jitsu and your master. Tell him to show a spider guard, a sweep … Who does that is only thinking about fame and money. I’ve trained and tried hard to get a black belt. I’ve Been loyal to teachers and training partners. Jiu-Jitsu is one thing; MMA is another. Respect the art. “

On average it takes someone training 3-5 times a week (consistently) about 10-12 years to attain black belt ranking.  See what many do not realize is that in BJJ (with a reputable decent teacher) you have been said belt for at least 6 months by the time you receive it.  The belt is indicative of your experience on the mat.  EXPERIENCE comes with time.  Period.  Originally in Judo there was white belt, and then black belt.  On a simple level we can dissect the color ranks as being markers of experience, with darker belts indicative of more time on the mat (hence why they were dirty and darker).

It is imperative that we raise the standards of BJJ and keep them high.  Regardless of your skill or talent wouldn’t you prefer to EARN a promotion then just be handed it??  I suppose if that was human nature we would live in a much different world.  Though I feel most of these words will fall on def ears if the message gets to one person it is worth it.  Keep standards high!

Surviving A Gunfight with Lt. Bob Stasch of the Chicago PD