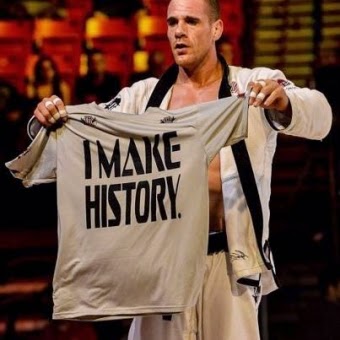 Talk about timing… the Daily Show repeat wrapped up and I hit the guide on the TV remote to see highlighted on the bottom “Legacy FC MMA” which of course I switch on.  There it is, one minute into the first round of Rafael Lovato Jr.’s professional middleweight MMA debut!  Showcasing his trademark pressure passing, RLJ slipped through the guard and secured a head and arm choke raising his hips while driving his opponent Canaan Grigsby into Sandman territory, milking the tap with just a few seconds left in round one of Legacy 35 in Tulsa, OK.

SO nice and refreshing to see some solid BJJ and grappling in MMA.  I hope that RLJ will take away a lot from this win as he has some gaps to fill, but this is nothing short of awesome to see a solid pro debut from one of Carlos Machado’s early students and current Saulo Ribiero protege.  Congrats Rafael!