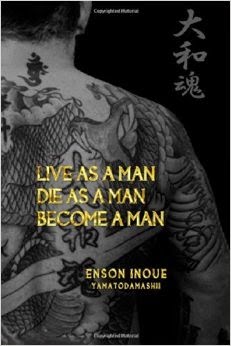 I have been a fan of Enson Inoue’s since early in my martial career.  I remember seeing some old Shooto fights a karate buddy had VHS (that is an archaic recording medium that can now be viewed in the Smithsonian) of and Enson was one of the fighters.  His bravery inspired me, his attitude entertained me, and his fights NEVER disappointed.  From fighting MMA, to rescuing dogs and feeding the needy after the terrible nuclear disaster just a few years back, I have always been drawn to the grappling and MMA legend. So when his self published autobiography “Live As A Man, Die As A Man, Become A Man” hit the market I was stoked, as Enson Inoue IS living martial arts history.

To understand Enson one must have a fundamental understanding of Japanese culture and history.  Enson lives by the motto ‘Yamatodamashii’ which is loosely translated as Samurai Spirit.  Essentially it is the embodiment of the Samurai spirit they carried into every task, every day and that is whatever you do you must do with 100% heart and conviction.  You must be prepared to die spiritually, emotionally, physically to stand by your honor and integrity.  These attributes Enson finds lacking in the 21st century, again something I completely agree with and can relate to.

The reader is taken along for a ride from Enson’s early childhood where he witnessed firsthand the effects of fear and cowardice.  The feeling of despair when a friend needed him and he did nothing laid a heavy impression upon Enson and drove him to never again find himself bowing down to fear.  His candor in sharing his true feelings is admirable and rare as he tackles some of the most difficult questions all men face. 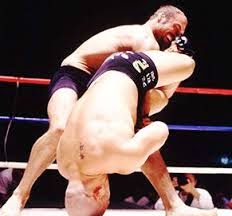 Any true fan of combat sports needs to put ‘Live As A Man..” on their X Mas wish list as Enson is the living embodiment of MMA, truly no bullshit a pioneer whose power and influence even I did not realize until reading this bio.  He takes a fight by fight breakdown of his entire MMA history; the wins and the losses.  I mean this is THE guy that handed Randy Couture his first pro MMA loss!  The list of men whom have stepped into the ring with Enson is literally a who’s who of MMA, ADCC, and BJJ; Igor Vivchanchan, Mark Kerr, Mario Sperry, Frank Shamrock, Big Nog, Guy Mezger…

His history and unfortunate falling out with the Gracies is detailed, as well as a short stint training with the Machado family as well.  Enson also touches on traditionally taboo topics such as the role of Yakuza (Japanese mafia) in the Japanese mixed martial arts business.  Inoue has been able to walk in both worlds because he carries himself with dignity and stands behind what he says.  Rare attributes in today’s society, thus respected by gangsters and police alike.  This position offers Enson rare insights into just how corrupt the organizations like Shooto and Pride really were / are!  Sad and disappointing to true fight fans who want to see the fighters taken care and the organizations follow a legit line to ensure the sanctity and longevity of the sport. 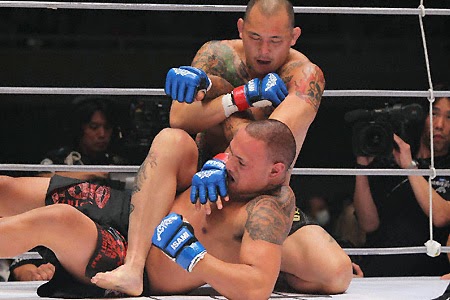 Overall the book is an easy and fun read offering a peak inside the mind of what I would consider a modern day warrior struggling with his identity and purpose.  Enson flirts with being a bit masturbatory in some of the retelling of the tales, and is in desperate need of a solid editor, but overall I think this book is one of the most honest insights into the mind and heart of one of the toughest SOB’s on earth.  My singular selfish complaint is that we get only a glimpse of the heart of Enson Inoue, which I can say without doubt, is much larger and greater then his fighting prowess!  Following Enson’s life over the years has shown me the generosity and humble serving nature of a modern Samurai where he has dedicated his life to helping out the animals and people in need throughout Japan.  He does not touch on any of his charity work designing and selling bracelets (Destiny Forever), delivering food water and hope to those affected by the terrible nuclear meltdown in Japan, as well as taking a yearly pilgrimage walking over 1300 miles in an effort to raise money for the needy in Japan.    Perhaps these are tales for a second biography  further down the road, but none the less aspects that I think are just as interesting as his fight life. 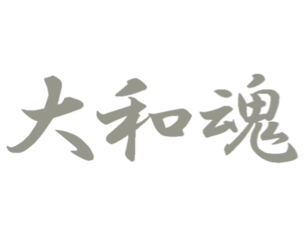 To order “Live As A Man” Click here.  For more information on Enson, or to order some of his custom made bracelets (proceeds of which go to charities helping both people and animals) please visit Destiny Forever.