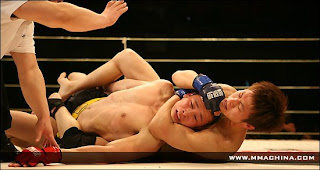 Throughout history the poor, downtrodden, have not’s have dominated combat sports. This is a general statement but if we look at the patterns of wrestlers, boxers, and Vale Tudo fighters, those who came from poor neighborhoods, grew up without, are often the most victorious athletes. We can speculate as to ‘why’ but in the end it is usually because they have nothing to lose and everything to gain!

If this theory is true, then China is long overdue for their hero to shine through! MMA is the fastest growing sport in the world, and China has jumped back onto the bad wagon with it’s Art of War promotion which showcases some of the up and comers in China. The following story is thank to Mark Richards.
Enjoy
JAB 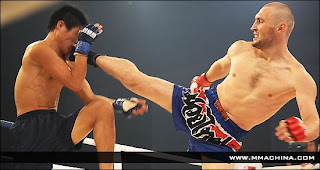 China is the most populous country in the world, and the mystique surrounding it’s martial arts traditions have long made it a sleeping giant when it comes to MMA. Now there is word that Art of War FC is ready to run its 12th event this coming May 23rd.

After the 10 edition of Art of War was held in December of 2007, the event took nearly 15 months of to organize and regroup. That show featured 12 bouts with Chinese fighters facing international competition, with countries such as Canada, Sweden, Italy and South Africa among those sending competitors. Of the 12 bouts, 11 were won by Chinese fighters, which included Olympic judokas competitors Zhang Tie Quan and Li Zhi Feng.

On March 28th, 2009 Art of War returned with another action packed card of twelve bouts, and the announced a full schedule for 2009. A series of ‘Try Out’ events starts in April and will run in June, August and November as well. The Art of War schedule will follow with July 11th’s AOW 13 and has shows scheduled for September, October and December.

The upcoming AOW 12 event will feature Wu Hao Tian in the main event. Tian is considered one of China’s brightest prospects, and has. 2-0-1 record. The rest of the card is to be announced, however renewed sponsorship for 2009 will see a star studded guest list. Scheduled to referee the show are well known American ‘Big’ John Mccarthy and former Pride referee Yuji Shimada. Several other international MMA stars are expected as guests at the event, including former UFC Heavyweight Champion Tim Silvia, Fabrizio 1erdum, Jeremy Horn, Josh Barnett, Babalu Sobral and Ricardo Liborio. Also expected a 300 strong delegation of fans and trainers from the United Arab Emirates.

The event gets wide support in Beijing, which is the biggest city in China. The Olympic Sports Center in Beijing is one of the venues that hosted the 2007 Olympics, and it has been the home of the AOW shows for several years. For more details check the website at www.artofwarfc.cn. A complete listing at the card should be available in the coming weeks.