The Chinese long saber, often referred to as the Miao Dao, has long been one of my favorite weapons within the Chinese martial arts (CMA).  Graceful, powerful, just holding it in your hands makes you want to move with it.  For the most part it is extremely rare and relatively unknown here in North America, but its popularity is catching on, and Jack Chen of the Historical Combat Association has translated a classic and made it available to the masses.   “Ancient Art of Chinese Long Saber” is the translation and interpretation of the book of the same name written in the Ming Dynasty by Cheng Zong You.

I learned the Miao Dao from John Wang years ago while training with him in Denver, CO.  Later when I was training with Mike Martello I discovered his passion for the Miao Dao and we set out to collaborate on a number of projects regarding the weapon, as well as an immersion into the study of the weapon for myself.  Unfortunately Mike passed just prior to us getting together to train the Miao Dao.  I guess it was not meant to be. 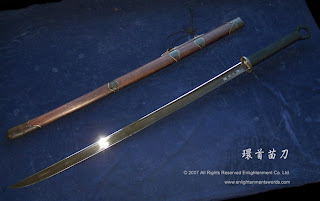 I have seen most of what is commercially available on the Miao Dao which is not much, and is not saying much either.  Jack Chen’s translation is the first step in many strides towards dissemination and sharing of information on the weapon arts of the CMA, many of which are in danger of becoming extinct in the next generation or so.  Mr. Chen is a self proclaimed novice to the weapon which I think keeps the translation clear to a certain point, but also threatens a lack an understanding of context in some regards.  This is the bane of all historians trying to recreate something that no one is 100% sure of.

Broken into approximately seven parts, Chen has translated the complete manuscript without annotation including:

These chapters represent the direct translation of Cheng’s Ming (1368-1644) Dynasty work.  Jack Chen was sharp enough to also include a 30 page addendum to the back of the book offering supplemental information on the weapons and combat tactics such as the use of the crossbow and spear!
Overall Cheng’s work is rather superficial as you can tell it was meant as a reference to what a soldier already knew, not a manual to be learned from.  Basic descriptions of stances and positions fail to mention any body mechanics nor strategies, not even gripping!
I confess no fluency in Chinese so my reading and translating skills are nothing to speak on, but my basic martial Chinese fluency finds no error in Chen’s work.  Literal and direct, his translation is consistent throughout the text.  Matching the sayings along with sketch drawings one can get the general idea of the stance / position being explained.  Chen has re-traced many of the images, as the originals were starting to fade.
The form itself would be very difficult to learn from this book (and you should always seek out an actual instructor anyways) and with no techniques offered one can only speculate on the actual application of many of the movements.  But overall Jack Chen’s translation represents the first step in gathering information, sharing ideas, and helping build the weapon based arts of the Chinese culture.  So much has already been lost due to lack of interest, yet the CMA hold so many treasures and links to a fabled history that spans thousands of lifetimes!  In this regard Chen has created a gem for any of us who fancy such topics and interests.
Coming in a little heavy at $35 (including quick shipping from Singapore) this 152 page book will make a welcomed addition to Chinese martial artists as well as weapon guru’s the world over.  Click here to view sample pages or to order your copy today!
As an ending treat, the late Mike Martello teaching the Miao Dao.  Poetry in motion!  RIP mi amigo.