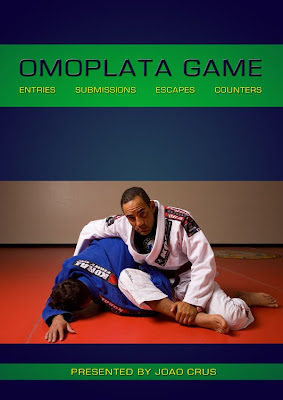 Texas Brazilian Jiu Jitsu Professor Joao Crus has released a new DVD instructional set entitled “Omoplata Game”  which includes four parts, all addressing various aspects of the omoplata including sweeps, submissions, set ups, and escapes.  Personally I was uber excited about doing this review because I have been slowly working omo’s into my personal guard game, and though I have met with some decent success I am always looking for pointers to improve upon.

Broken down into four categories, and an equal amount of disks, each disk has easy to navigate menus where you can play all techniques in a row or skip to a certain technique to work on.  Crus makes an effort to try and teach a complete “game” via DVD, and while this is a difficult task I must admit he did a decent job.  I would call this a fundamental course on the omoplata as there is nothing high flying or convoluted taught on this DVD, but rather solid basics on how to enter into position, how to execute the submission or the sweep, and how to escape said position.

Technically this is a no frills DVD set that gets right to the meat and potatoes of the subject.  A single camera angle with Crus turning and moving to accommodate different views, the editing is simple and clean and I found no blips nor errors with any of the clips.  Being involved in DVD production before I realize how much of a headache the music can be in terms of finding non-copy written material, and the music selection is fine for the “Omoplata Game,” but the one no-no in instructional DVD production is allowing the music to play over the actual instruction!  This not only drowns out the instructor but is also incredibly distracting, as is kid chatter in the background.    Joao’s language and descriptions are very clear and understandable as his English is excellent.  And besides the music the audio is very clear throughout the four disks.  It should also be mentioned that this title is available in Spanish as well!

Laid out in a logical progression the DVDs are super easy to access and learn from in your home or dojo.  The picture is clear and contrast is solid.  Joao and his partner wear two different color gi’s the whole time so it is easy to discern whose-what is tied up in the others whose-what.

Set Ups is the longest DVD (as it should be) at 33 minutes, and covers both open and closed guard entries, with seven techniques showcased in the closed guard section and twelve with the open guard.  For the most part Crus tries to show each technique several times and breaks down each part of the movement explaining what he is doing.  Though the majority of the material on all four disks is BJJ specific, in the open guard section Crus offers an entry from a self defense / MMA perspective of getting hit and ground and pounded.  I mention this because many instructional DVDs today neglect the roots of our beloved art and that is in self defense on the streets!

Crus offers a solid smorgasbord of positions to enter into the omoplata with spider guard, inverted guard, De La Riva, and working the cross grips as well.  Again all entries are nothing that require incredible flexibility or agility.  Joao seems to have a grasp of how to teach the everyday practitioner how to excel at his game.

Showcasing 7 techniques over 12 minutes, disk two covers escapes and counters to the omoplata.  I think placing this second in the progression of teaching is genius of Crus!  Where most would showcase the escapes or counters to a given focus at the end of the instructional DVD, Crus realizes that more so than anything TIMING is a huge component in escaping the omoplata!  When locked in it is very hard to muscle out of, so many of the escapes are predicated upon you being savvy to the lock coming and rolling or standing prior to your opponent getting your shoulder down and controlling your lower body.

Joao also has some nice follow ups after the roll outs, standing escapes, roll over as well as the sit up counter to the roll over!  Smooth transitions abound!

Focusing primarily on the “Star Sweep” (this is my term, as Mr. Crus has not named any techniques.  So I take liberty and use the most common term I know the sweep by.) for when you have a cross grip and your opponent stands to pass, you under hook the same side leg as your sleeve grip, and essentially rolling over your shoulder you sweep them back.  Joao has five sweep variations on this theme, with one ground sweep which is your standard omoplata sweep.  I really got a lot out of the 5 standing sweeps, but I was left thirsting for more on the ground, and scratching my head as to why we needed a separate disk for a 9 minute tutorial!?

Wrapping up the set with the submissions disk, Joao treats us to over 11 techniques on various submissions we can get to via the threat of omoplata, or if our omoplata fails for some reason.  Crus’ leg attacks stick out from the rest of the crop as he enters into a knee bar quite interestingly from a failed omoplata attempt in guard.  His pretzel omoplata and chokes round out the 20 minute DVD.

I must admit I was hoping to see a bit more variety in terms of wrist locks, leg attacks of all kinds, as well as transitions to other flows.  But again for the beginner to omoplata’s this is an excellent introduction to a often overlooked, and underused attack.

For those unfamiliar with Joao Crus and his story… Prof. Crus’ wife contracted lung cancer at a very young age, and this DVD (along with a handful of others Crus has produced) is an effort for Mr. Crus to raise money for treating his wife.  10% of the sales of the DVDs go to the American Cancer Society.  So when you purchase these DVDs for yourself, or for a gift keep in mind you are helping combat Cancer nationwide!  Look for future reviews of Joao Crus’ DVDs here on the Ground Never Misses.

To order “Omoplata Game” or to peruse all of Joao Crus’ titles please click here!

Khukuri The Blade & The Beer