Wanted to send out a big “Good luck” to hometown hero Maurice “Mo” Smith who just signed (according to mmajunkie) with Resurrection Fighting Alliance in Kearney, NE.  March 30th, Mo will face Kyle Keeney (12-7) who has not won since 2010. 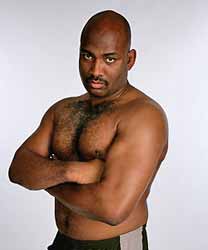 I was speaking with my coach, Brian, this morning about this news and I made mention that Mo is one of MMA’s most underrated fighters, and Brian even presented the case that he really should be in the UFC hall of fame!  And while their may be some hometown bias from Brian, I have only met the man once or twice, but have followed his career since I was a tyke.

Smith started his martial career in kickboxing winning his first title in 1983.  Renown for his powerfully devastating leg kicks, Mo went on a ten year unbeaten streak amassing a record of 53-13-5 in professional kickboxing.  Smith would then take his top flight striking game into the MMA arena.

Fighting a bit in Pancrase, RINGS, and Battlecade Extreme Fighting Smith became the first legit striker to start shutting down the grapplers who had been dominating Japanese MMA.  Battlecade folded sending Smith back home to fight in a little organization called the UFC, where he faced off against Mark “The Hammer” Coleman (full roid edition!  Nobody was testing for no-thing back in 97).  Coleman easily outweighed Smith by 20 pounds of pure muscle mass and quite frankly no one expected Mo to do much damage to the dominant ground and pound specialist.  Low and behold Mo once again used his striking to completely shut down and frustrate the former NCAA wrestler, and win a unanimous decision for the title on July 27, 1997!  Smith would go on to destroy Tank Abbot’s legs with round kicks in UFC 15, but then lose the belt in a close (controversial????) decision to an up and coming cat named Randy Couture.

Fighting in Pride 7 Mo picked up his first submission victory with a choke over Branko Cikatic.

Later on Mo would coach in the IFL and TKO MMA legend Marco Ruas (his second victory over Ruas) on May 19, 2007.  The following year he would submit world famous Rick Roufus here in Tacoma, WA. on the Strikeforce card.

Maurice Smith has fought in every major MMA organization to hold an event, being a title holder in at least two of those organizations.  A multi organizational kickboxing champ for over 10 years straight.  A successful coach and all around great competitor, we here at The Ground Never Misses wish you the best of luck Coach Mo next month!