Mark Small has been training in the traditional Chinese martial arts for over four decades and has combined his understanding of the “internal” arts, with his training in Shuai Chiao (Chinese wrestling) in the writing of his first book, “Taiji, Xingyi, and Baguaquan Throwing By Way of Our Modern Masters.”  Broken into seven chapters over 100 pages, Mark includes an extensive glossary and lineage charts in his self published text, that is furnished with photos of old masters as well as technique breakdown of various movements from Xing Yi, Bagua, and Taiji. 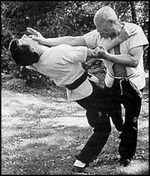 Mark makes a valid attempt to combine the metaphysical aspects of the Chinese martial arts with modern combative stand up grappling, and overall I think he gives an honest effort regarding a subject matter that is near impossible to convey in English.  Starting off with a short chapter explaining the basic foundation of internal energy, upper-middle-lower dan tien (he defines these as energy centers), and how the masters of old applied this theory.  My first observation is the reader is inundated with foreign, complex terms right from the get go, so the glossary comes in handy for sure. Subject matter such as silk reeling, rooting, “dragon body” posture, etc. are quite diverse and intricate topics and Mark tries hard to convey the metaphysical classical texts in a modern combative context.

Honestly these subjects and topics are intricate and detailed enough to warrant texts of their very own, and while Small offers an introduction to these principles, it is cursory at best and I fear the absolute beginner picking up this text would be lost within a nebulous maze of verbiage.  In one breath “bio mechanics” is mentioned, but then the reader is quickly whisked back into metaphysical talk.  Fort example from chapter three: 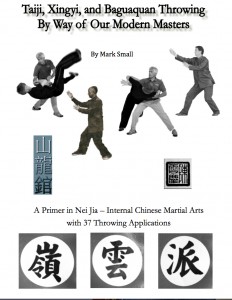 “Let the nei jia principles and tactics needed for throwing your opponent pertain in your bio-mechanical interpretation of his intrinsic energies at the moment you intercept his force, and spiral with it, neutralizing him along changing radii and curves.  Your silk reeling dragon body  will then allow you to press into your bowed arms from your body’s core, as you squeeze yourself into your opponents space or body shape.  Turn your dragon body as he turns his body to avoid being neutralized or counterattacked by him.”

A lot of info in that little paragraph that is never really clarified throughout the text.  Mark goes into some partner exercises from there which offer sound fundamental drills.  This in my humble opinion is one of the better chapters albeit too short!  Partner drills are sadly overlooked in the Chinese martial arts and true and honest sensitivity exercises often turn into weird ego contests that eventually are ruled by strange dogma.  Here Mark offers a progressive series of four exercises as a primer for getting into the actual throws and take downs that dominate the remainder of the 35 pages.

Chapter seven on the 37 throwing applications from the internal arts is a great chapter showcasing applications from one of the least respected grappling arts…. Taijiquan!  Comprised of 80% grappling and counter grappling techniques, most people think of Taiji as being a goofy, crystal rubbing, tree hugging meditation, Mark shows that to be rather inaccurate of all practitioners.  Teaching a variety of throws and takedowns, Mark also corresponds the pic to the principles found within the book which is INCREDIBLY helpful!

The pic’s are black and white but Mark is savvy enough to ensure his partner is in contrasting colors so that readers can easily discern whats going on (a common mistake by authors).  The photo’s are cut out which gives a rather flat / one dimensional view of the movement, but overall I think the photo’s are clear enough to convey the movements and technique.

Overall Mark Small gives an honest effort with his first book, which could have benefited from some honest, objective editing.  Kudo’s to Mark for tackling a subject that most would not dare, and I feel this is a step in the right direction for Chinese martial artists in regards to dissemination of information.  Far too long have we kept principles and theories “secret” for no good reason.  Way too much info has died with past secrecy.  Part of dispelling this issue is writing and producing material to get to the mass public.

So on Black Friday why not actually support a small business for once, as this book would be a perfect stocking stuffer for the martial artist in your life!

“Taiji, Xing Yi, and Baguaquan Throwing by Way of Our Modern Masters” can be purchased for $30 by clicking this link.