Spent the better chunk of the day training with Jean Jacques Machado today in Windsor.  His friend and longest affiliate Ron Dupuis of Windsor BJJ, hosts JJ every year and the seminar was attended by folks from Ohio, Michigan, all over Ontario, Pennsylvania, Washington state, and even Mexico.  Surprisingly there was little local support from schools other then Ron’s, even with Rigan Machado affiliates just over the Ambassador Bridge.  But the 35 or so attendees were treated to an amazing seminar with Jean Jacques and host Ron Dupuis and his crew were ever so warm and welcoming.

The Machados as a whole treat each and every student they share the mat with as family first and foremost.  So reporting on a “seminar” is a bit awkward for me as it is more like a personal training session.  Jean Jacques has a presence one must experience… hard to articulate, but it is as if he is talking directly to YOU every time he teaches. You forget that the guy over there has 40+ years of experience; was voted the most technical grappler at ADCC; and is considered by many to be one of the greatest grapplers walking the earth.  So when he shows you a “basic” armbar from the guard along with the drill to burn it in… you pay attention to the details. Typically what you assume is “basic” ain’t so “basic” and that is exactly where the money was at this seminar. 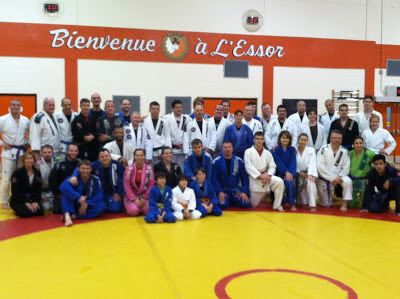 If I was forced to name a theme I would have to say ‘Working from the cross lapel grip,’ not because of the way it rolls so eloquently off your tongue, but simply because you forced me.  To the inexperienced eye it may have seemed that we bounced around, as Prof. JJ worked mount / guard / open guard / top four quarter as well as transitioning throughout these positions.  Yet every position had a common element… our right hand grabbing our partners right lapel.

We used the lapel grip to attack with chokes.  Set up armbars and omoplatas.  To off balance our partner.  To push.  To pull.  Jean Jacques guided attendees of varying levels effortlessly through each series and if he saw an issue he would address it by re-teaching the movement, emphasizing our attention to his hip placement and movement.  Then we would drill the movement.  Repetition is key with the Machados!

One of the best attributes of Jean Jacques is his mind.  Though I have not had the opportunity to sit down and pick JJ’s brain and have a deep conversation about BJJ, what little I have spoken with him and trained under him I can say with confidence that he is one of the most strategic grapplers out there.  Throughout the seminar he wove in minor strategies on how to deal with bigger, stronger opponents.  Proper grips and weight distribution when your opponent counters your original technique, quickly followed by another attack of yours.  “Anticipate your opponents reaction.  When you limit him to only a couple of ways to react, you know those reactions!”  These types of lessons are invaluable to me at this stage in my game.  And getting a glimpse into how Jean Jacques thinks is awesome from my perspective as a coach.

What can I say that I have not before in the past… you need to train with Jean Jacques Machado!  Next year ensure you contact Ron Dupuis and make this annual event, as there is no reason the whole Midwest and Canada should  have missed this.  Ron, and really most Canadians, are warm and welcoming as all get out.  You get great training partners from Ohio (thanks Matt “Iron Man” Reilman)!  Plus you get to train with a living legend of the art we love.  Check out Jean Jacques teaching at the 5 Brothers Camp in October, as well as his first visit to the Pacific Northwest when he lands in Seattle, WA. November 16-17 of this year!

The Evolution of Rener Gracie the Teacher