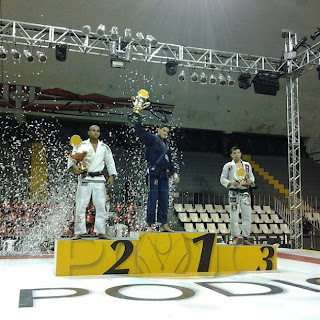 Here are the results from the Copa Podio tournament over the weekend.  I would love to show you some clips, but from the sounds of it very few people saw anything due to another piss poor video stream online.  Apparently the technology to run an uninterrupted stream has not quite caught up to the technology they have to take your money;)

Clark Gracie nailed a collar choke on Diogo Borges at the 22 minute mark of an hour long submission only match.

Leo Lo climbed all over Calasans beating him 7-0 in a no gi superfight.

Onto the round robin tournament and we see that Travis Stevens puts on one of the best showings of an American at Copa Podio!  After a tough day of fights Stevens misses third place after a 2-2 tie got Miyao the decision.  Felipe Pena defeated Diogo Moreno via points to win the championship!