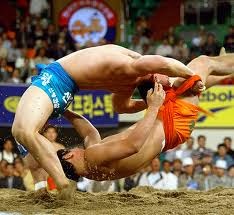 North Korea took a break from threatening to nuke the ‘Murican’s to squeeze in their 11th annual Grand Bull National Ssireum competition a couple weeks ago.  Thanks to Wrestling Roots for smuggling out the contraband footage!

Ssireum is Korea’s endemic wrestling style where you hook one hand through a loop on your opponents belt and underhook with the other hand.  Traditionally they fought in foot deep sand, but apparently the communists could not get enough prisoners to pound rocks into sand so they settled for a tarp surface.  Essentially the same rules of Sumo… first to touch the ground with more than two points losses.

Here we see the highlights of the weight categories and the catch weight division which saw perennial favorite Song Kwang Chol cleaning house and taking home a 1000 kg bull, a golden cowbell (Nazareth called… they have an opening in the band), and a diploma (not sure in what).  Not sure what I would do with a 1000kg bull, too bad it was not a kobe sow!!