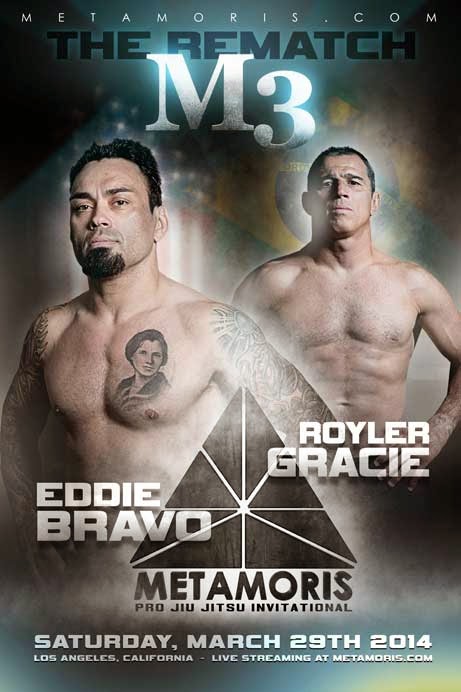 “Old Guys Rule” proved to be the rule tonight at Metamoris III where Royler Gracie and Eddie Bravo fought a 20 minute half guard clinic with Eddie throwing on submission attempt after submission attempt including his famous Vaporizer leg attack to which Royler would not give the pleasure of a tap.  A match no one believed would happen until it was well underway proved to be one of the greatest rematches in grappling history where both fighters went for it playing their specific games; Bravo with his infamous 1/2 guard and Royler’s renowned knee cut pass.

I must admit a bit of confusion in that the initial rules stated that a match would not be stopped if a submission was on!?  Technically that match should have continued until a tap or Royler escaped.  Just saying…

Though this fight ended in a draw it proved to be one of the most exciting matches of the event as well as asserting the fact that Bravo’s first win was certainly no fluke.  Both of these fighters are well into their 40’s and proved to be some of the best conditioned athletes at Metamoris.  I personally would love to see more “masters and senior” fights at Metamoris.  The first Metamoris was supposed to showcase Nelson Monteiro versus Jean Jacques Machado but never happened because of an injury to Monteiro.  But the experience level of Gracie and Bravo combined is well over 50 years, and experience is exactly what shaped the fight of the night!  Imagine if Metamoris brought back some of the rivalries of old… Gracie vs. Machado!?!?  Make sure to vote to your right and leave any feedback in comments below —- >

The third edition of the submission only super show proved to be the best.  Production quality was topped only by punctuality (an issue with past events), with excellent commentary from Kenny Florian and Jeff Glover.  Both of whom brought the right combo of humor and information without the awkward pauses with past commentators.

Results:
Zak Maxwell vs. Sean Roberts
Surprisingly this match opened with a double guard pull which went back and forth until about the 5 minute mark where Maxwell passes Roberts guard and quickly follows into mount.  Attacks of Maxwell are defended to a draw.

Gui Mendes vs. Samir Chantre
Gui set the pace throughout this match and it was clear early on that though Samir was certainly game, he was simply dominated this evening.  At the 13:30 mark Gui nails a baseball choke with the nights first submission.

Babalu Sobral vs. Dean Lister
After a frustrating standup period Lister decides to pull guard and but scoot.  This leads to a great back and forth battle that includes the requisite leg attack flurry by Lister.  Though Lister attains mount he is unable to finish.  Awesome no gi battle that ends in the nights second draw.

Kevin Casey vs. Keenan Cornelius
Originally Cornelius was scheduled to fight Vinny Magalhaes but a pre-fight medical check Magalhaes could not pass due to a staph infection.  Immediately the Gracie’s (organizers for Metamoris) made phone calls and were able to grab Kevin Casey, MMA fighter and Rickson Gracie black belt, to fill in at the last minute… literally.  And let me tell you Casey stepped up, sweeping Cornelius several times from standing frustrating the younger fighter for the first half of the match.  But then Keenan’s spidey sense kicked in and he noticed Casey tiring a bit and turned on the heat pulling into 50-50 guard, leg dragging Casey’s leg to the opposite hip where Keenan attacked the inside heel hook securing the tap at 6:56.

Simply put…a clinic on explosive Berimbolo attacks, which to the laymen sounds like something terrible you bring back from a trip to Guatemala, but to those who know Rafa this comes as no surprise.  Clark certainly was aware actively backing his hips out and barely squeaking out of Rafa’s back control attempts.  Thankfully for Gracie no points were counted as this match ended in a draw.

Khukuri The Blade & The Beer