One of the greatest things Leo Gaje gave the west when he started teaching Pekiti Tirsia Kali was structure and order.  Many Filipino martial arts instructors are notorious for being completely unorganized with any kind of cohesive learning model, comparatively Gaje was ahead of his time.  Gaje’s top student Tim Waid has followed in his teachers footsteps with his latest offering in his DVD series on Pekiti Tirsia Kali (PTK) combatives; “Advanced Footwork and Lost Secrets of the Filipino Martial Arts.”

This will be the third DVD in the series I have reviewed of Tim’s, and as with all of his work technically these instructional’s are top notch.  The production value is second to none with superb editing offering clean chapter breaks and no glitches across the 75 minute DVD.  As with previous productions the addition of the boom camera is one of the greatest aspects of Tim’s DVDs.  Giving the student literally a birds eye view of the instruction enables one to get as close to 3D as possible via a 2D media outlet.  In an art as complex and involved as kali these innovations may seem trite to most, but to those of us who have been around the FMA for the past 20 years you know how important multiple angles and different views are when trying to learn such an advanced art.  Waid also incorporates the use of chalk lines on the floor of his training space.  These footwork diagrams certainly help the student.

Tim Waid’s entire life has been consumed by two things… training Pekiti Tirsia Kali and his service in the Marine Corp.  A full time instructor who just launched his new site PTK – SMF Waid’s resume reads like a technical manual on combatives and strategy.  One must keep this in mind when viewing his DVD’s as he is intense and rather militaristic in his delivery which coupled with diligent drilling ensures technical proficiency.  His analyzation of the footwork is amazing concise and keep in mind this is someone who has dedicated his ENTIRE martial arts life to a single sole system.  This is his pure expression of PTK as he knows it.

That said it is important for any potential buyers of this DVD to take the title seriously, this REALLY is advanced material!  The student must have a foundation in the footwork and basics of PTK specifically to get anything out of this instructional.  For instance the footwork you learn in Doce Pares will not suffice as a foundation for the work in this DVD.  It is not that the basics of any art are inefficient, just that you need to thoroughly understand the fundamentals of Pekiti Tirsia specifically to reap any of the benefits of Advanced Footwork.  Waid does show several repeats of the technique he just taught, but overall is moving rather quickly through various drills, illustrating the importance of understanding range and proper angling.  If you do not have the basics I would highly suggest purchasing the Basic Footwork DVD first and working these fundamentals thoroughly with a partner, otherwise you are wasting your pennies.

Broken into a half dozen chapter, Advanced Footwork offers the following scene selections: 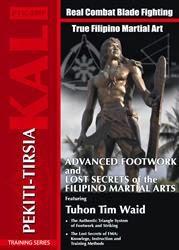 Each chapter has sub-chapters wherein lie the marrow of the lessons.  For instance Tim Waid teaches the universal evasion angle in the initial “Lost Secret” chapter.  Not only does he teach it, he EXPLAINS the reasoning WHY you step that direction instead of just any other angle.  Again this is a welcomed departure from 90% of the FMA instructionals out there where for the most part individuals show off and demonstrate but rarely actually teach and explain.

The secrets are the training methods.  Not really a secret, nor lost, huh?  Anyone who has been in the martial arts for more then a few years should know that the sole secret in any art is training.  Waid offers insights into the intent of engaging with weapons at range which I also feel is a unique attribute of this DVD.  Retailing for $79.95 makes this one of the more expensive DVD instructionals on the market, and currently is not available for electronic download so you will need a DVD player. Though the price may be prohibitive this DVD (and honestly so far what I have seen of the entire series) is second to none.  There is absolutely no similar information available on the Pekiti Tirsia Kali system out there, and honestly I have not seen any FMA instructional come close to the quality and depth of Tim Waid’s Authentic Pekiti Tirsia Kali Training Series.

So tell the wifey you need a small allowance, a free weekend, and get online grabbing yourself a great new blade such as the TROIKA as well as Tim’s series of DVDs, and train your ass off!  A wonderful resource for those not close to an instructor or even veterans of PTK who wish to witness Waid’s expression of the art.

For more titles, or to order “Advanced Footwork” click here to be redirected to Tim Waid’s brand new website!