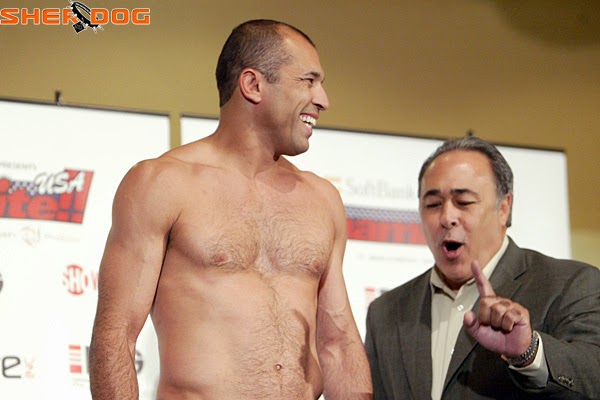 It is scientifically impossible to prove whether continuously being choked out, or PED’s (performance enhancing drugs) are the root cause for such ignorant and naive statements to come from Royce Gracie, but here is what he offered to MMAFighting.com on the recent subject of PED’s in MMA:

“It shows that the system is working,” “You’re trying to look at the bad side, I’m looking at the good side. Instead of trying to encourage people, ‘Oh, let’s ban MMA because everybody is doing drugs, let’s ban NASCAR because they’re advertising drinking and driving.’ Let’s look at the good side. The system is working. Let’s not try to put down the fighters because one fighter made a mistake, decided to party and do whatever.”
“How many people got caught [recently]? Five?” Gracie said. “Five of how many we have in the sport all over the world? I don’t think it’s a problem.”
“I feel like the system works,” Gracie said. “It’s good. Let’s not think of the bad side, let’s think it’s the good side. It works.
“The system works. That’s why they’re getting caught.”

First of all his analogy is not only completely wrong, it is ignorant.  NASCAR drivers are not drinking prior to racing.  To the best of my limited redneck knowledge this has not been an issue since bootleg days.
Secondly it is sad and pathetic to see Royce Gracie, who many consider an ambassador for MMA and the UFC, not only take PED’s but also make ignorant statements like the one above.

In my day to day conversations it has become brilliantly clear that this naivety is pervasive in both our culture and the martial art/sport realm.  People honestly believe the majority of MMA fighters are “clean,” which to me means they do not take ANYTHING, EVER.  Yet you push the conversation with folks and you quickly find out what they mean is… the majority of MMA fighters know how to cycle properly so they don’t get caught.  For example the argument being that Anderson Silva was recovering from a serious injury (leg break) and therefore was off his normal juice – clean cycle, hence his timing was off, the result being popping hot on several tests.

It is becoming abhorrently apparent to me that this is the nature of our culture / race.  We will lie, cheat, and steal to justify our own end.  Shame on me for thinking the martial arts were immune to such cancer.  I sincerely hope that the mixed martial arts world works to fix this.

The Evolution of Rener Gracie the Teacher

Martial Arts Sports Competitions and Online Betting for Them